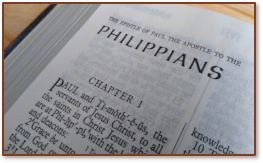 The Epistle to the Philippians

Who – Paul states in Philippians 1:1 that he is the author of this letter. There is no reason to doubt his authorship. Since the earliest known existing manuscripts of Philippians date from around 200 AD during the height of Roman persecution of Christians, it is hard to imagine how anyone could benefit from forging a writing of Paul. From this, and from the form of the letter, we can assume Paul’s authorship with confidence.

When & Where – It is evident from the contents of the letter itself that it was written while Paul was in prison. Furthermore, we know from the greeting that Paul was with Timothy. This would rule out the time of Paul’s brief imprisonment in Philippi itself (Acts 16:16-40) that we looked at earlier. It is also unlikely, of course, that Paul would have had time to write a letter during such a brief imprisonment. Furthermore, Paul’s sending of greetings from “…those of Caesar’s household” in verse 4:22 would probably rule out the time of Paul’s imprisonments in Jerusalem and later Caesarea. The most likely place for the writing of Philippians is, therefore, Rome. Paul was imprisoned under house arrest in Rome, but with relative freedom to continue preaching the Gospel – 60-62 AD. This is the most likely time for the writing of the letter, since by the time of Paul’s second imprisonment in Rome just prior to his death (66 AD), Timothy was acting as the pastor of the church in Ephesus where Paul wrote to him the letters of 1 Timothy and 2 Timothy.

We should note that, based on the word “finally” in verse 3:1 and again in verse 4:8,.some scholars have argued that Philippians is actually a collection of three letters, and we are missing parts of all three of the original letters. This is possible, but we do have a manuscript containing almost the entire book of Philippians dating from around 200 AD, so by that time, at least, the contents of the letter were being considered and distributed as a whole, even if they originally came from three separate letters. This is an interesting argument, and makes the basis for a nice master’s thesis or doctoral dissertation, but isn’t really relevant to the study of the truths contained within the letter (or letters). Maybe someday, someone will dig up a manuscript that contains the “missing” pieces, but I doubt it. God doesn’t mess around with His Word that way…

For God is not the author of confusion but of peace, as in all the churches of the saints.

Why – Ostensibly, Philippians was written as a thank you note for a gift of support that the Philippians had sent by way of Epaphroditus to sustain Paul in his imprisonment (verse 4:10 and 4:18), and this thank you was returned to them by Epaphroditus as well (verse 2:25). Much more than this, though, the letter to the Philippians is a letter of encouragement to the brethren in Philippi who were no doubt beginning to feel the sting of persecution for standing upon the Name of Jesus Christ. As such, the letter has great truths that are just as applicable today in an atmosphere of growing persecution of the believers as it did to the Philippians almost 2000 years ago. The theme of the letter can be summed up in a single verse…

Rejoice in the Lord always. Again I will say, rejoice!