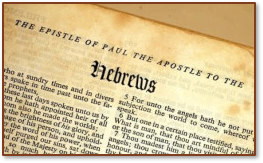 Before we begin our verse-by-verse study of the Hebrews scripture itself, it’s a good idea to get a high-level view of the book as a whole, and try to answer some important questions –

Hebrews is a letter (epistle) written to a specific audience. This is apparent from the closing passage which is a conventional farewell similar to those found in the other epistles in the Bible…

20Now may the God of peace who brought up our Lord Jesus from the dead, that great Shepherd of the sheep, through the blood of the everlasting covenant, 21make you complete in every good work to do His will, working in you what is well pleasing in His sight, through Jesus Christ, to whom be glory forever and ever. Amen.
22And I appeal to you, brethren, bear with the word of exhortation, for I have written to you in few words. 23Know that our brother Timothy has been set free, with whom I shall see you if he comes shortly.
24Greet all those who rule over you, and all the saints. Those from Italy greet you.
25Grace be with you all. Amen. [Hebrews 13:20-25]

Unfortunately, the letter does not contain an initial greeting as all the Bible’s other epistles except 1 John do. In following the tradition of the day, such greetings usually identified the letter’s author, and then its intended audience right at the beginning of the text. Hebrews does not include such an initial greeting, nor is there any explicit identification of its author elsewhere in the text. Hebrews has traditionally been attributed to the Apostle Paul. The earliest known manuscript of the text – a papyrus codex dating from approximately 175-225 AD – groups Hebrews among Paul’s other epistles, placing it immediately after Romans.
NOTE – We should be wary of reading too much into the placement of Hebrews within this codex. A quick review will confirm that the books of the Bible have often been placed in size order rather than chronological order, except where the text itself implies a chronological relationship between two texts as with 1 Corinthians and 2 Corinthians, for example.
Because Hebrews contains no internal identifier of its author, the writer of the book has been in question since at least the time of Eusebius (260-339 AD) who wrote in his history of the church first published somewhere around 320 AD that the authorship (and therefore the validity) of Hebrews had been questioned by the church in Rome. Modern textual criticism has also called Paul’s authorship into question, pointing out that the Greek usage and phraseology found in Hebrews are enough unlike those found in the other Pauline epistles, as to imply that someone other than Paul was the author. Since the lack of an internal identification by the author of Hebrews has proven so critical, one might well ask why the text of the letter lacks the traditional greeting.
Of course it is very well possible that by the time the letter was included in any of the collections of holy scripture we still have today, the first part of it had gone missing. The letters of the day were most often written on papyrus or parchment scrolls. The codex (similar to a modern bound book) did not replace the scroll as the preferred written medium until almost a century after Hebrews was most likely written. It is possible that the beginning of the Hebrews scroll from which later codices were transcribed may have been lost, since the beginning of the document would have been on the outside when the scroll was rolled up and thus more exposed to the elements than the latter portion of the text. It seems unlikely, however, that only a single Hebrews scroll was in existence. The letter was likely transcribed onto many scrolls for sharing among a number of Jewish Christian congregations. It is highly improbable that all of these had been lost except one which was missing its greeting by the time the first codices of Hebrews were transcribed or that they all suffered exactly the same damage from exposure.
A better explanation is that Hebrews was written by Paul in Hebrew to Jewish Christians, and only later translated into Greek (possibly by Luke – Paul’s Gentile companion and physician) for the benefit of non-Hebrew-speaking congregations. Recall that Saul had been a Pharisee – a religious leader and teacher of the Jewish people – prior to the life-changing encounter with the risen LORD Jesus on the road to Damascus when he became Paul – the Christian missionary to the Gentiles. Naturally, Saul (and later Paul) would have taught his Jewish disciples in their native language – Hebrew – rather than the prevailing lingua franca of the Roman Empire in Paul’s day – Greek. Thus it makes sense that the original text of Paul’s letter to the Hebrew church(es) might have been written in Hebrew rather than Greek, and later translated into Greek for the benefit of the wider body of first-century believers. This would explain the lack of author’s identity in the greeting, since the translator would not have wished to identify himself as Paul (who had likely been martyred by the time the translation was made). The presumed translator would also have wanted to include the Gentile churches in his target audience, and might thus have left out the portion of the original greeting that identified the original addressees. This would also explain the differences in Greek usage and phraseology between the texts of Hebrews and the other Pauline epistles.
For the purposes of our study going forward, we will assume that the original author of Hebrews was Paul.

We can establish the earliest and latest possible dates for Hebrews due to its mention of Timothy (Hebrews 13:23). The apostle Paul met and began discipling Timothy – a Gentile believer – during his second missionary journey just prior to the establishment of the church at Philippi about 50 AD (see Acts 16). Timothy then accompanied Paul in his missionary work for over a decade, and was present with Paul during his first house arrest in Rome 59-62 AD. At some point Timothy was released (as we know from Hebrews 13:23), and traveled first to Macedonia and then to Ephesus. We know this from Paul’s two letters to Timothy. Although Paul encouraged Timothy to return to Rome (2 Timothy 4), there is no Biblical record that he was able to do so before Paul himself was martyred around 66-67 AD. Church tradition holds that Timothy became pastor of the church in Ephesus, and was martyred in 97 AD, having been clubbed by a crowd of pagan worshipers after trying to stop their pagan religious procession. Thus Hebrews could not have been written before 50 AD or after 97 AD.

If we assume Paul is the author we may narrow down the time for the writing of Hebrews to one of Paul’s imprisonments in Rome – 59-62 AD and 66-67 AD. Assuming from Hebrews 13:23 that Timothy’s release from imprisonment had been fairly recent at the time of writing, we may assume Hebrews was written toward the end of Paul’s first imprisonment in 62 AD.

It is clear from the text of Hebrews that the letter was written to Christian believers of Jewish heritage. This is apparent from the focus of Hebrews, which as we shall see compares and contrasts salvation by faith in Christ alone with the works-based atonement rituals, sacrifices, priesthood, and temple that are spelled out in God’s Law (Torah) – the first five books of the Bible. Such a discussion would have been of no interest, and in all likelihood largely incomprehensible to most Gentile believers unfamiliar with the Jewish rituals. Clearly the intended audience of Hebrews (as its name implies) was Jews – specifically Jewish believers in Jesus as their promised Messiah.

There is no Biblical basis by which to determine which specific Messianic Jewish church or churches the author was addressing with this letter, but church tradition holds that it was written to the church in Jerusalem, whose members at the time of writing would have almost all been Jews.

We know from the book of Acts and from Paul’s letter to the Galatians among others that by the time Hebrews was written, there was a considerable movement among the early churches to superimpose the requirements of conformity with the Jewish Law upon Christian believers. The so-called Judaizers insisted that salvation depended upon conformity with Jewish ritual practices such as circumcision and with Jewish dietary laws – not solely upon God’s grace through faith in Jesus’ resurrection. The church council in Jerusalem we find detailed in Acts 15 was called to discuss this subject, and consequently Paul, Barnabas, Silas, and Judas were sent out with a letter to the churches in Asia Minor releasing Gentile believers from conformity with Jewish law except that they were to refrain from sexual immorality, and from eating meat offered to idols, blood, or animals that had been strangled (Acts 15:23-29). The focus of this second missionary journey, and indeed the focus of the Judaizers themselves was toward Gentile believers. Paul also addresses the topic in his letters to the churches in Rome, Galatia, Philippi, Ephesus, and Colossi – Gentiles for the most part.

Hebrews accomplishes the same purpose for the Jewish churches whose members had been raised within the traditions and practices of the Jewish laws. Unlike the admonitions against the Judaizers found in the other epistles written mostly for Gentiles, Hebrews makes the same types of arguments not by pointing out false teaching, but by explaining the Jewish traditions of atonement through animal sacrifice and the ministrations of the Aaronic priesthood as being mere models of the final and perfect atonement found in Jesus Christ – the promised Messiah.

As we will soon see in our verse-by-verse study, Hebrews addresses a relatively few main topics –