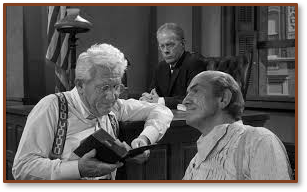 The 1960 movie “Inherit the Wind” is a dramatization of the so-called “Scopes Monkey Trial” (The State of Tennessee v. John Thomas Scopes) of 1925 in which a teacher was tried for violation of a Tennessee law forbidding the teaching of evolution in the state’s public schools. The sensational trial pitted the famed trial lawyer Clarence Darrow (Henry Drummond in the movie) against the populist politician and former presidential candidate William Jennings Bryan (movie character Matthew Harrison Brady), and ended up as a debate between the merits of the theory of evolution and the Bible. Scopes was convicted and fined $100 by the judge. On appeal, the conviction was overturned on a technicality pertaining to the imposed fine. The state declined to seek another trial, since Scopes had by then left his job as a Tennessee public school teacher.
During the trial, Darrow called Bryan to the stand for questioning as an expert on the Bible. A portion of the movie dramatization of that questioning is quoted below. It is relevant to our study of Jonah because it highlights the way in which calling into question God’s miraculous preservation of Jonah has been used as an entrée to call into question the entire Word of God.

Notice that Drummond began his assault upon Biblical Truth by calling into question the story of Jonah. Notice, also, that when Brady allowed the compromise that the first day of creation might not have been a literal 24-hour day, he opened the door to questioning the entire Word of God. This is not hyperbole. We either believe the Word of God is just that – the Word of God – without question or compromise, or we call into question the very Gospel itself. There’s no middle ground here. We either believe it or we don’t. The Word is either true or it isn’t.
And the stakes are high. The eternal destinies of all people hinge on belief or disbelief in the Gospel of Jesus Christ proclaimed in the Bible. Consider once again the Refuge Church Statement of Faith with regard to the inerrancy of the Word of God.

We believe that all the Scriptures of the Old and New Testaments are the Word of God, fully inspired and without error in the original manuscripts, and that they are the infallible rule of faith and practice.