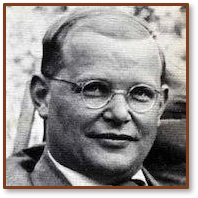 …All that can happen has happened already, not only on the cross, but also in us. We have been separated from sin, we are dead, we are justified. With that the work of God is complete. He has established His sanctuary on Earth in righteousness. This sanctuary is Christ, the body of Christ. Our separation from sin has been accomplished through our death as sinners in Jesus Christ. God has prepared Himself a people which has been justified from sin. This people is the community of the disciples of Jesus, the community of the saints. They are taken up into His sanctuary, and in fact they are His sanctuary, His temple. They are taken out of the world and live in a new realm of their own in the midst of the world.

Henceforth the New Testament simply calls the Christians “saints.” It does not, as we might have expected, call them “the righteous,” perhaps because that term hardly does justice to the gift they have received. In any case, its reference is to the unique event of baptism and justification. It is true, of course, that our recollection of that event has daily to be renewed. It is equally true that the saints remain justified sinners. But there is also a further gift than these, the gift of final perseverance, or sanctification. Both gifts have the same source, Jesus Christ and Him crucified (1 Corinthians 1:2; 6:11), and both have the same content, which is fellowship and communion with Him. They are inseparably connected, but for that very reason not identical. Justification is the means whereby we appropriate the saving act of God in the past, and sanctification the promise of God’s activity in the present and future. Justification secured our entrance into fellowship and communion with Christ through the unique and final event of His death, and sanctification keeps us in that fellowship in Christ. Justification is primarily concerned with the relation between man and the law of God, sanctification with the Christian’s separation from the world until the second coming of Christ. Justification makes the individual a member of the church whereas sanctification preserves the church with all its members. Justification enables the believer to break away from his sinful past; sanctification enables him to abide in Christ, to persevere in faith and to grow in love. We may perhaps think of justification and sanctification as bearing the same relation to each other as creation and preservation. Justification is the new creation of the new man, and sanctification his preservation until the day of Jesus Christ.