Okay, I’m starting to get a bit confused about the exact days the work took place. I’m going from the dates the photos were taken, which in some cases are days after the work they document was completed. Sometime during the week of April 5-9 2021, the foundation prep work was completed. Once the concrete footings were adequately cured, the laying of the concrete block walls could begin. The last step completed by the crew before block laying began was removing the Masonite siding from the front and east side walls, and wrapping the open walls with house wrap. Strictly speaking this step wasn’t necessary for the block work, but would be needed before the addition framing could commence, and was easier to do before the block walls went up than afterward.

The weekend of April 10 & 11, I removed the wood framing and entry door from the east side walls so everything would be ready when the block crew arrived the next day. We brought about 450 concrete blocks up from Aiken when we removed the raised garden beds there. Our contractor Casey ordered about 250 additional blocks. Almost all of these blocks were used to build the walls. The connecting wall on the east side of the existing house and west side of the addition was doubled, and filled with concrete to support the floor joists of the addition and make the addition’s floor level with the existing house floor. In the end, the addition ended up being off level by about a half inch because none of us were aware that the existing house had a double sub-floor of 3/4 inch particle board over 1/2 inch plywood. But that’s a story for later on. All of the block was laid in two days – April 12-13 2021

In front of the house, the crew laid out a retaining wall for the front patio. Later, these walls were filled with re-bar and concrete. Then the area under the patio was backfilled with waste block and rock, and covered with plastic in preparation for pouring the patio slab which would support the front deck above it. The patio retaining walls were extended about a foot under the existing basement slab so that the patio slab would be fastened securely to the house. The patio wall at the east side of the patio was doubled. The inner wall would support the end of the patio slab, and the outer patio side wall aligned with the addition basement west side wall. 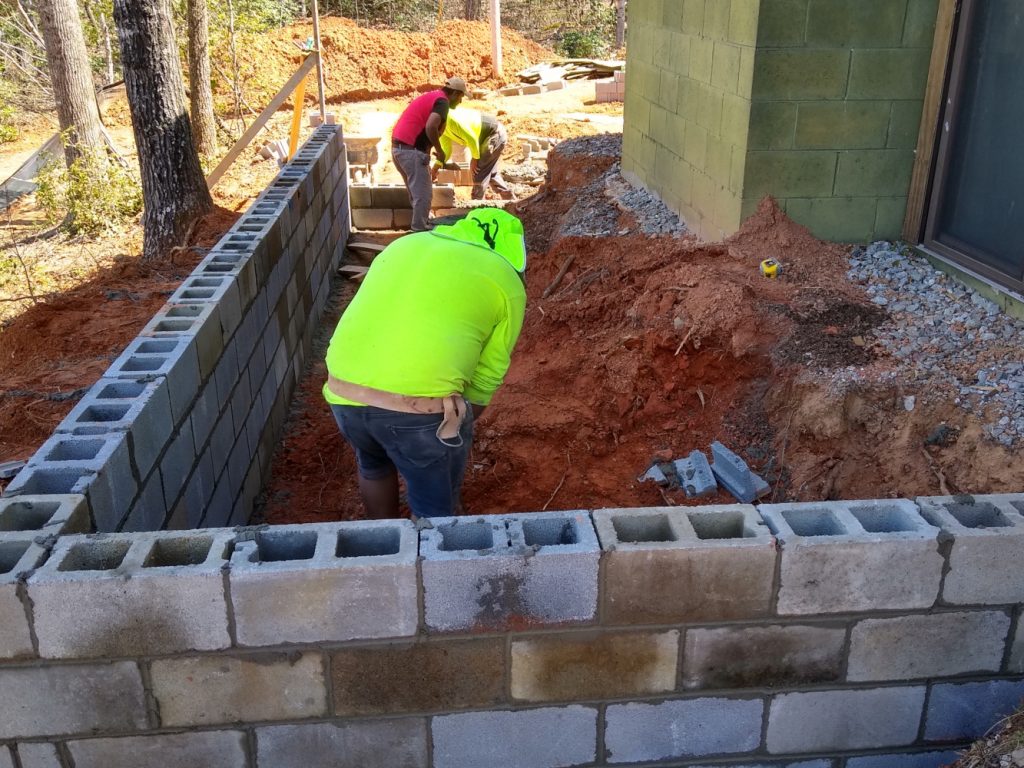 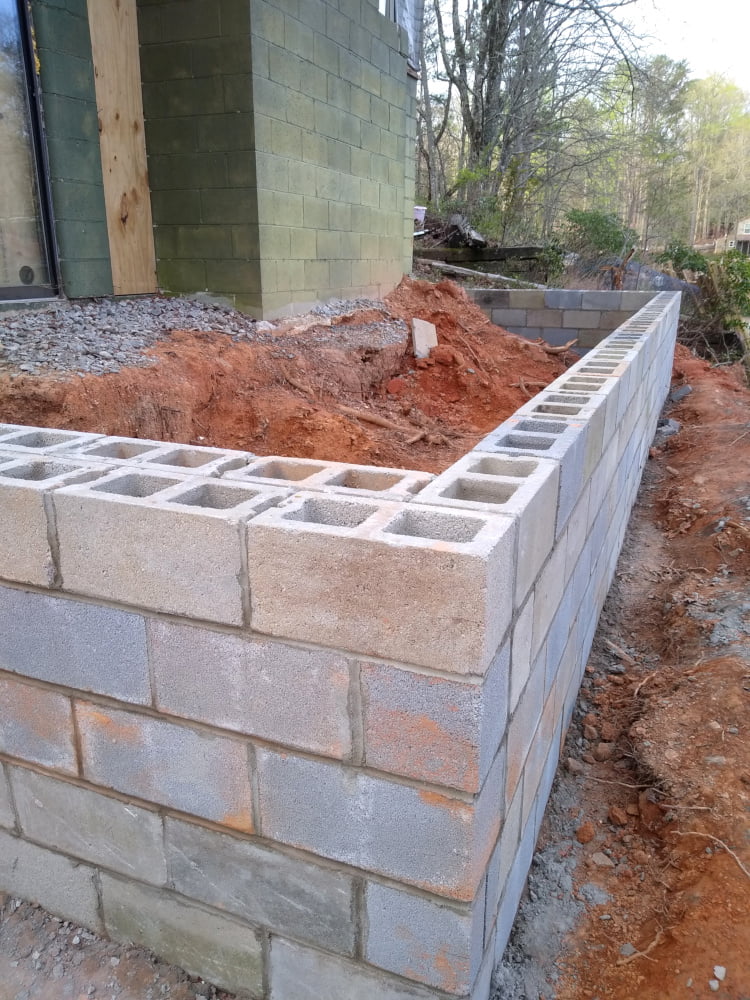 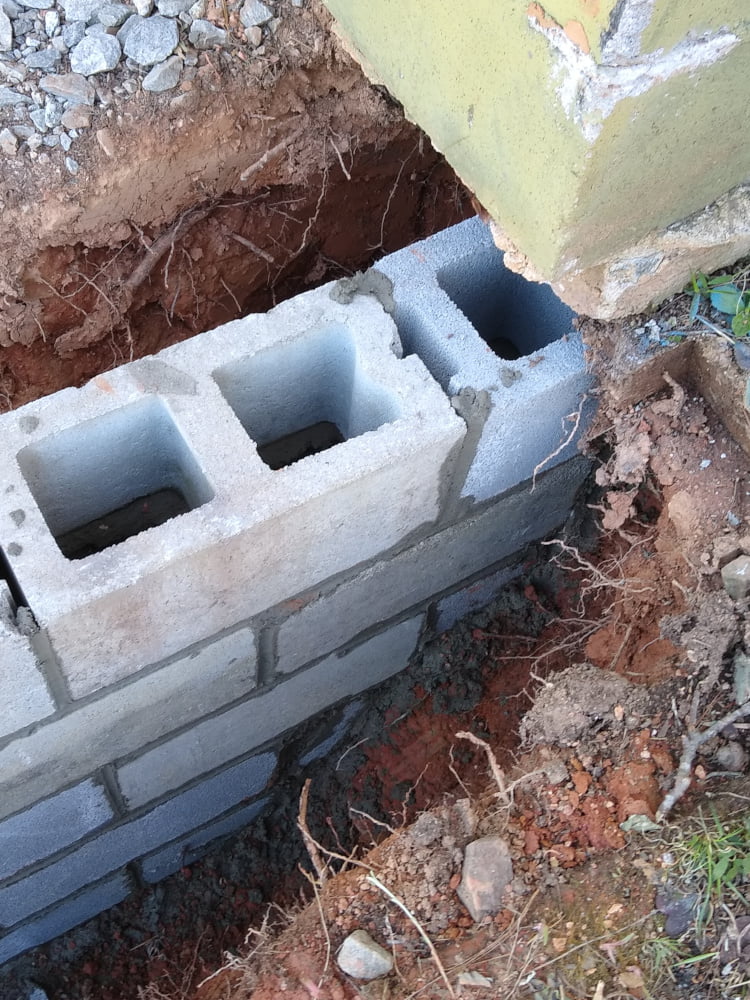 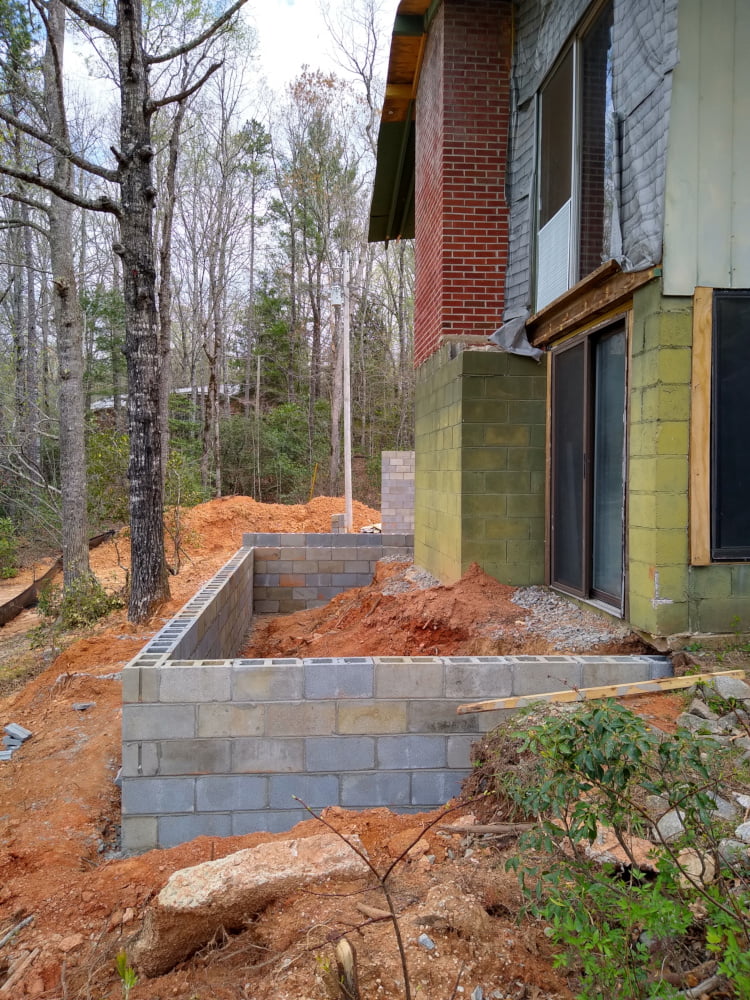 The foundation wall joining the existing house to the addition was doubled. The wood-framed portions of this wall were removed prior to the commencement of the block laying. The basement entry door on this side was also removed. Finally, the spaces between the existing basement block piers were filled in with block. Note the unpainted parts of these piers where the stairs have been removed. 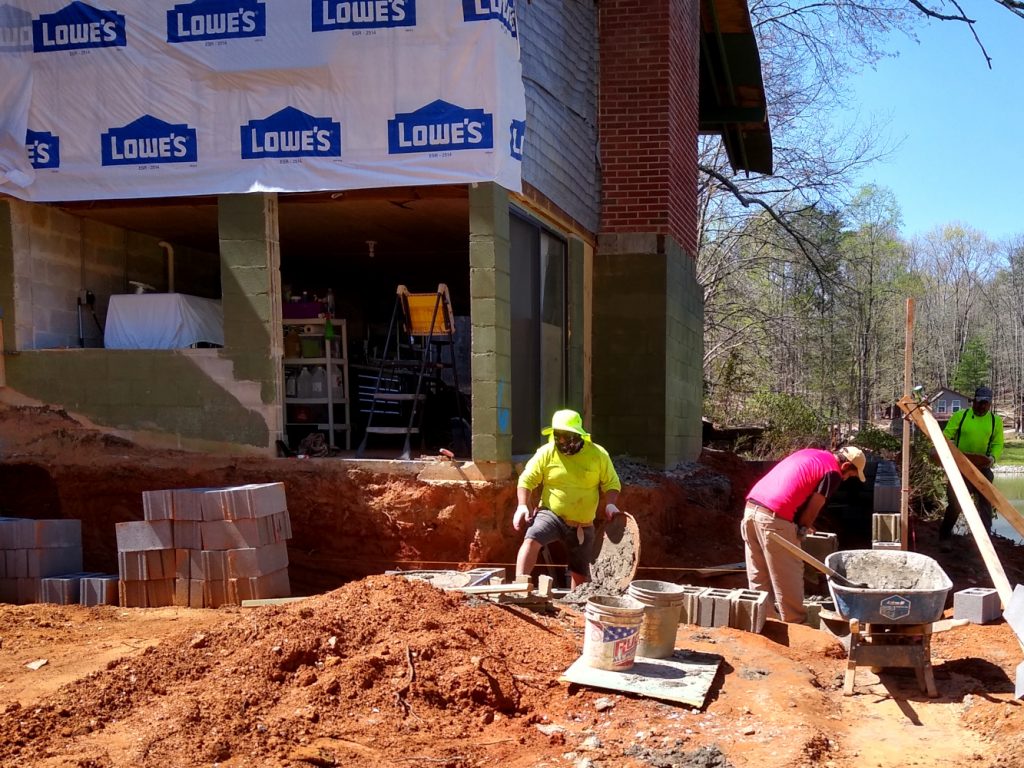 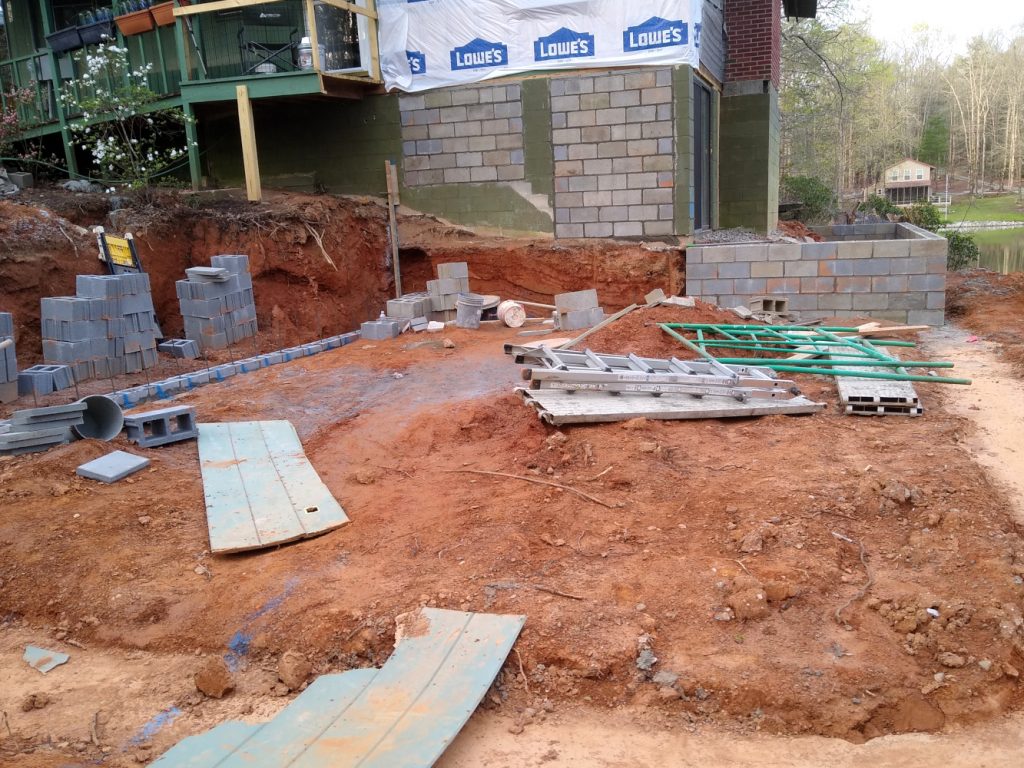 Outside of East Side House Wall 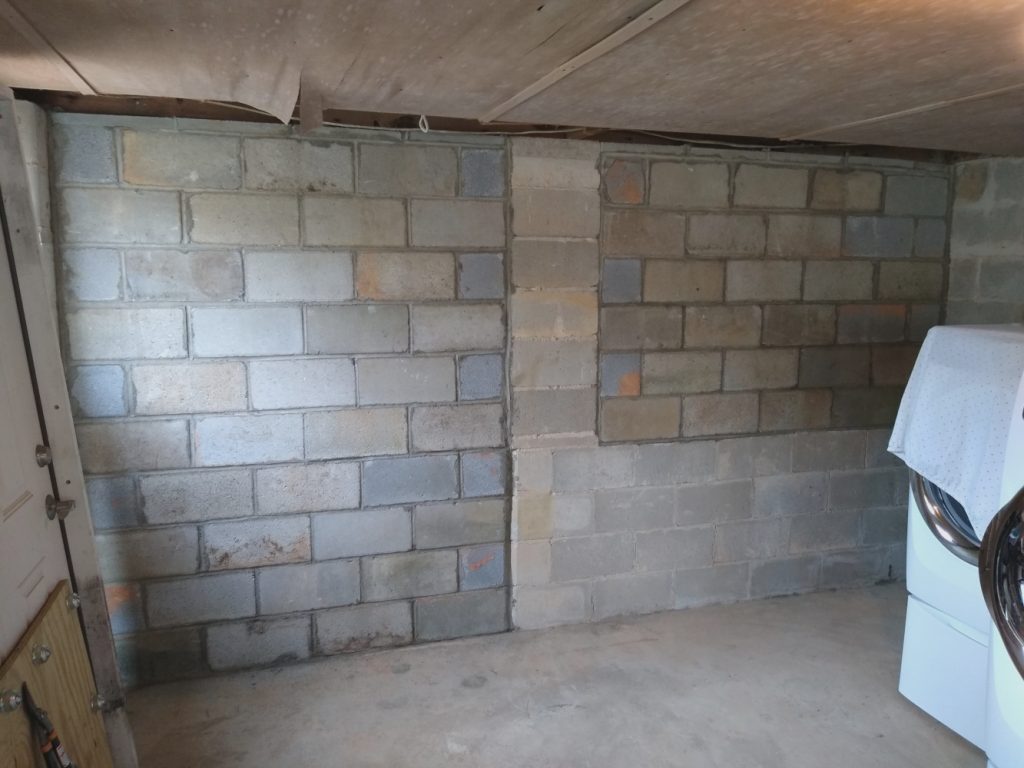 Old Basement Side Wall Blocked Up 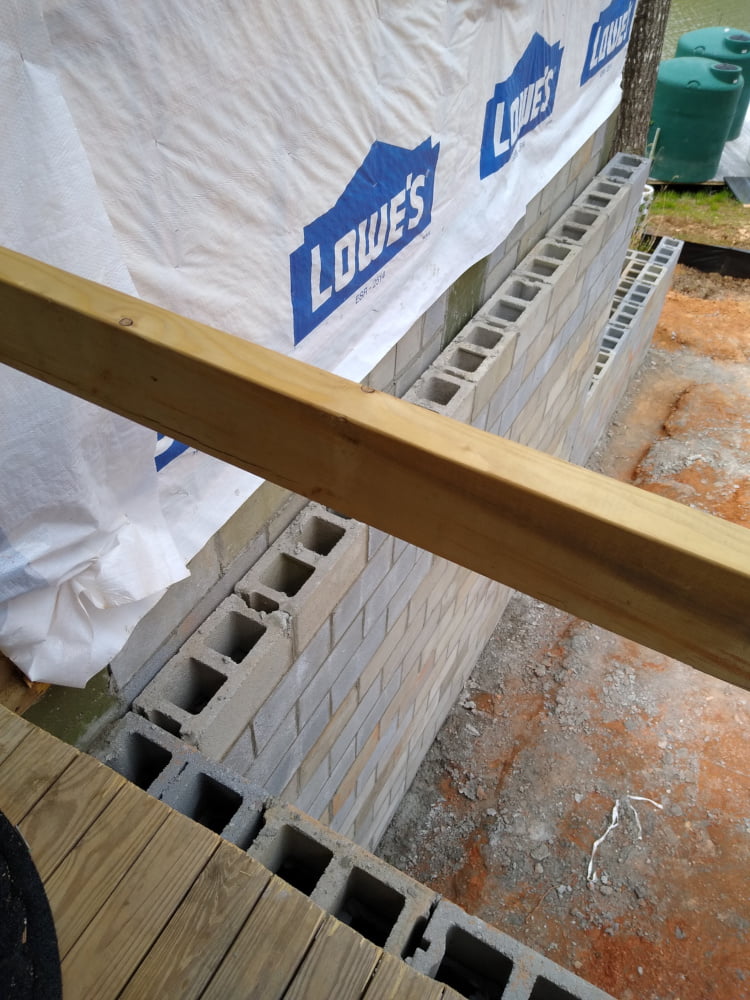 The majority of the block was taken up building the basement walls for the addition. Because the land drops off fairly steeply on the east side of the house, this basement is quite tall (9 feet from the slab to the bottom of the addition floor joists). An 8 foot wide roll up door will be installed in the northeast corner of the basement. 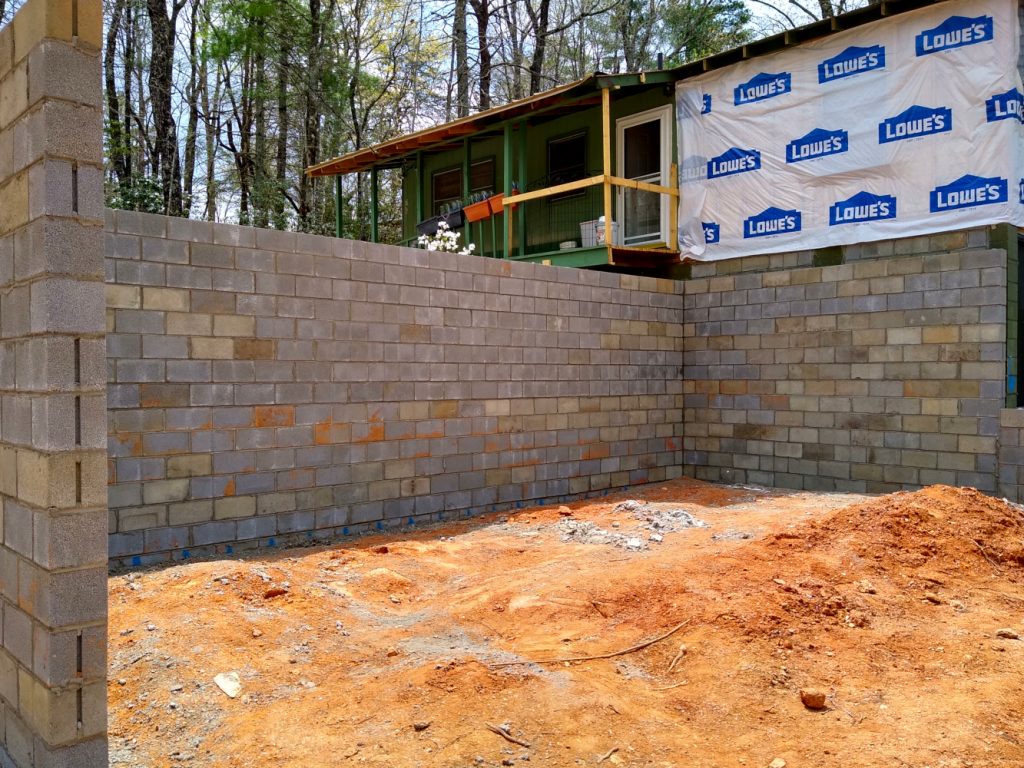 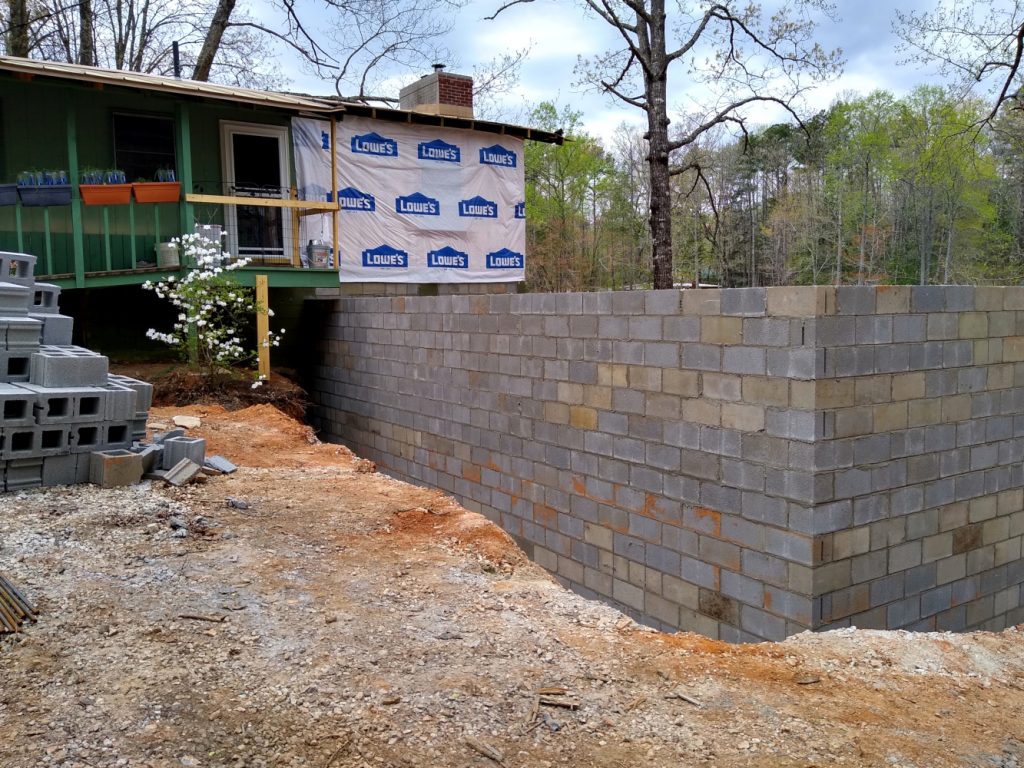 Addition Back Wall - Lots of Block
Previous Next