With the foundation preparations finally completed on April 15th, the concrete was placed the next day. Unfortunately, I had another commitment, and couldn’t be present to record the festivities. In addition to the pouring of the two slabs, the back wall of the basement and the inboard side wall were filled with rebar and concrete along with the small gap between the addition side wall and the original house side wall. Also, seven new concrete piers were cast in the crawl space under the original house to facilitate the eventual re-leveling of the floors after years of uneven settling. While the crew was casting those piers, they also installed a beam in the crawl space to support and approximately level the floor joists under the kitchen and pantry. That improved the wave in the floor there, but unfortunately won’t be adequate to get the floor properly leveled. As it turned out, that sub-floor needed to be completely removed, but that’s a story for another day.

NOTE – The photos in these galleries were taken a few days after the concrete work while we awaited delivery of the framing lumber.

The first part of the concrete job was filling the voids in the concrete blocks of the addition back wall and the mating wall between the existing house and the addition. Steel rebar was also installed into every other one of these voids to prevent the pressure of the back fill dirt and seepage water from uphill from pushing the wall over.

In addition, the mating wall has a slight gap between the existing house basement sidewall that was blocked in and the new addition inboard side wall because the original concrete block piers supporting the house were neither plumb nor square. This space was also filled with concrete.

Before the concrete in these voids had a chance to harden, steel anchor bolts were embedded into it which will fasten the sills of the addition’s wooden frame to the concrete block foundation walls. 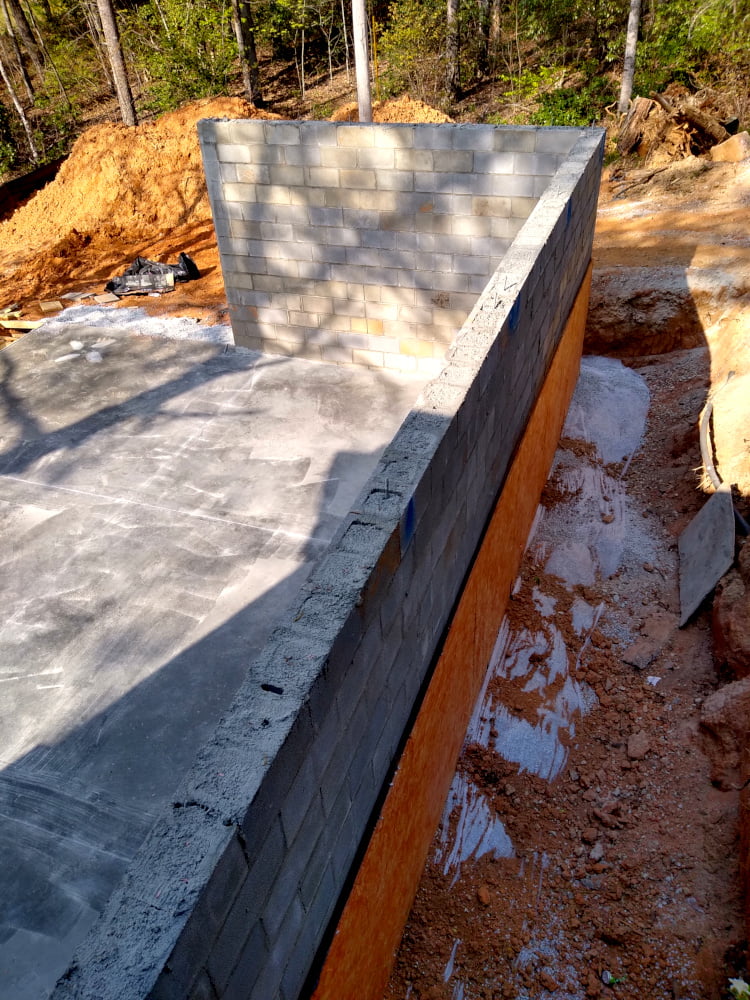 Back Wall with Rebar and Concrete Fill 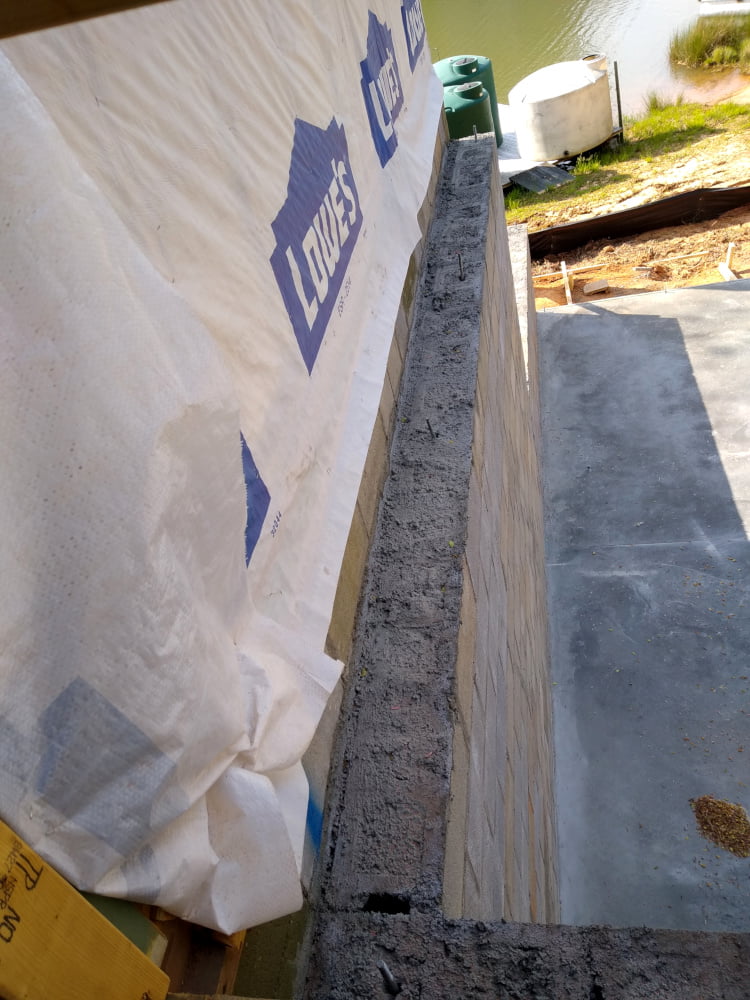 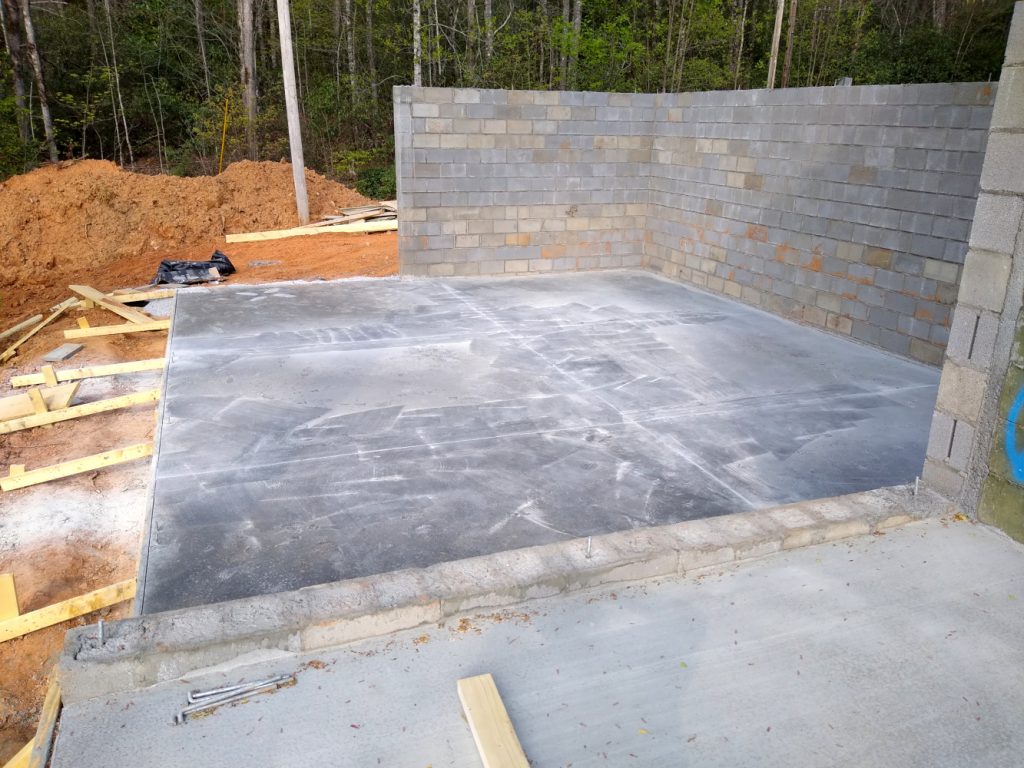 After the foundation concrete was poured, the finishers had to wait for the concrete to partially cure before they could finish the slab surfaces. Unfortunately, the pour got started so late in the day that they couldn’t complete the finishing work before it started to get dark. They left their slab float parked on the basement slab over the weekend. The imprint of the machine’s blades can be seen in the photos of the basement slab.

We were startled on Sunday afternoon when we arrived home from church to find the crew had returned to pick up the machine and to cut strain relief grooves into the slabs.

The photos of the patio slab show how the new slab was slipped under the existing house’s northwest and northeast corners to create a more solid foundation for the house above. 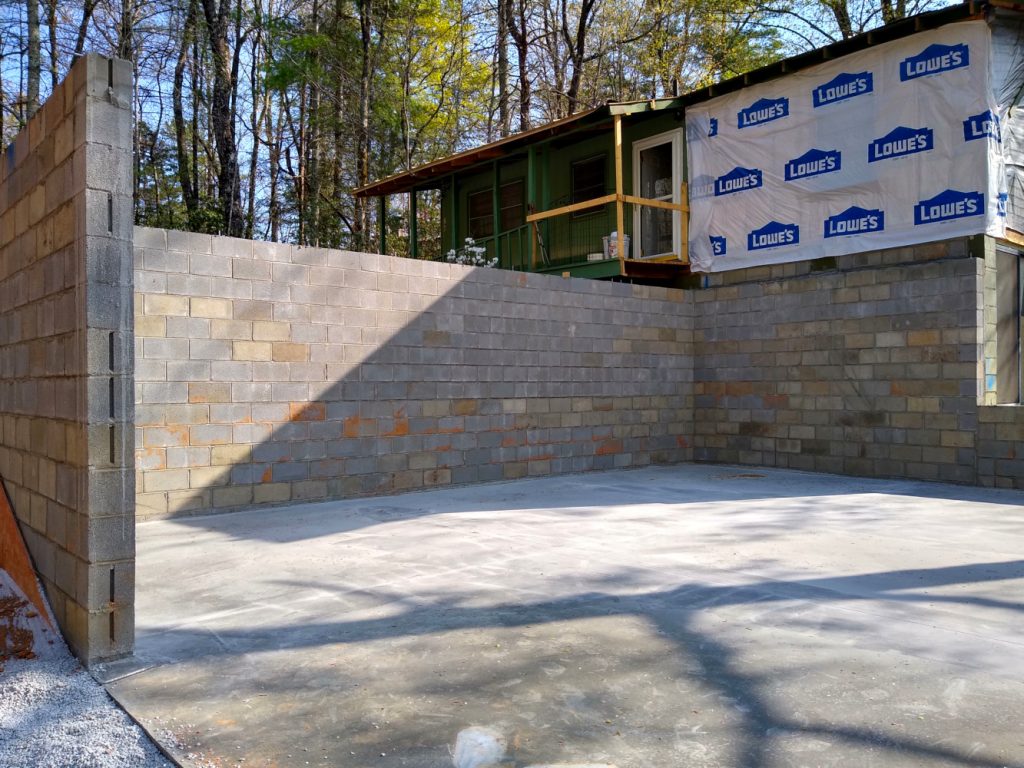 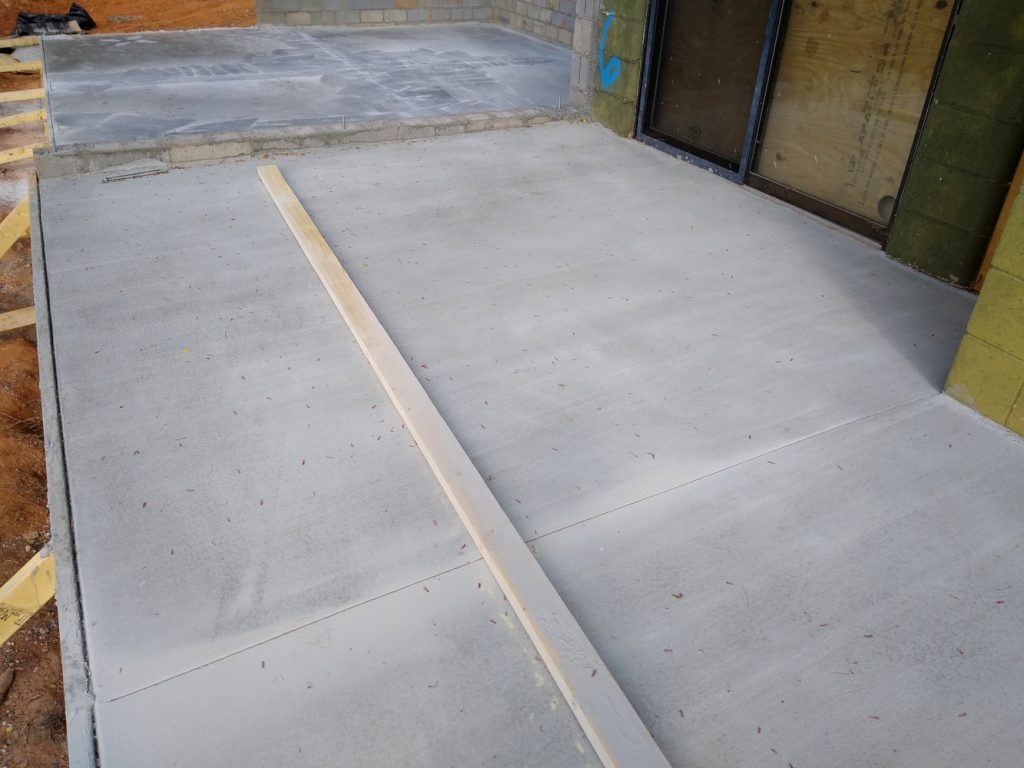 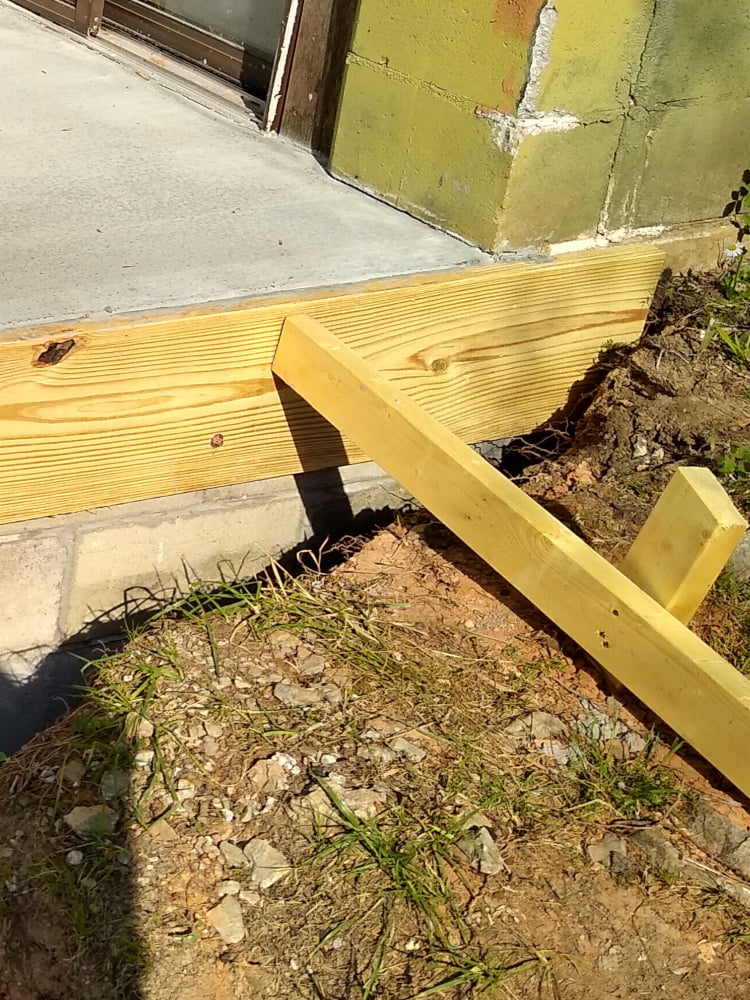 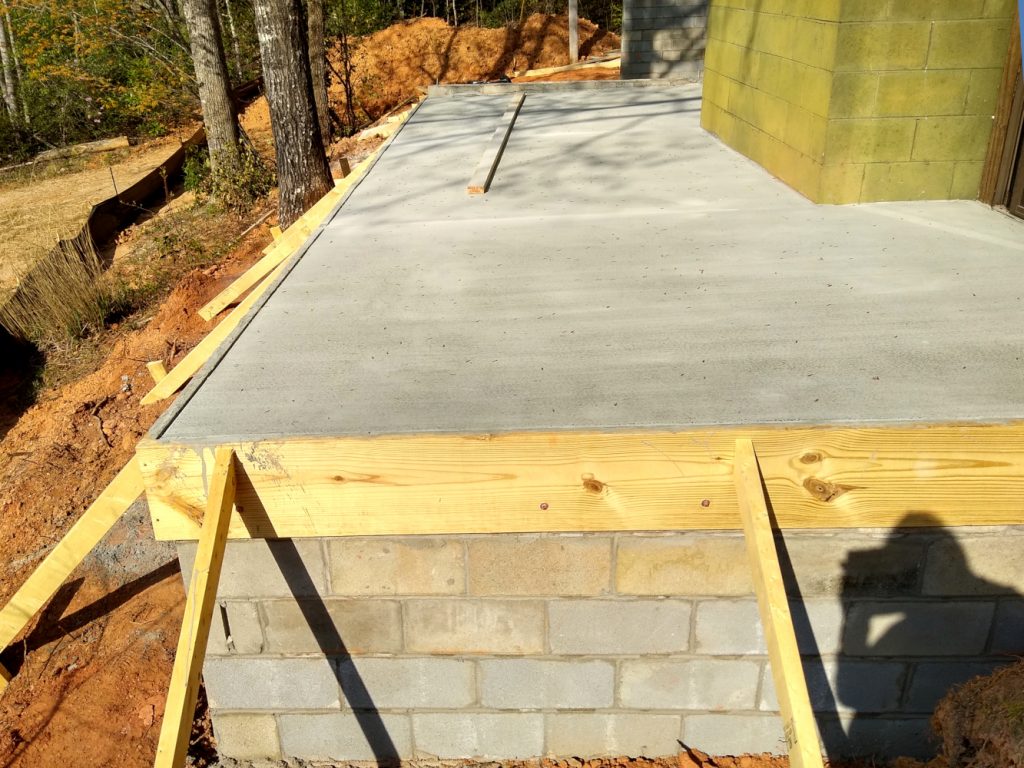 The next day – Monday April 19th – the waterproofing contractor came to seal the parts of the basement walls which will be in contact with the ground below grade.

After removing the excess mortar from the block joints and the base of the wall, they sprayed on the black waterproofing. Before the waterproofing had completely dried, they stuck orange sheets of foam insulation to it. Once the waterproofing had dried enough to hold the foam, they laid a few inches of gravel into the trenches at the base of the walls and ran a perforated drainpipe along the base of the wall from the northwest corner to a few feet below the southeast corner which they then covered with gravel. Finally, they spread a water permeable plastic sheet similar to landscaping cloth over the drainpipe and added just enough gravel to keep this sheet from being blown away by the wind. 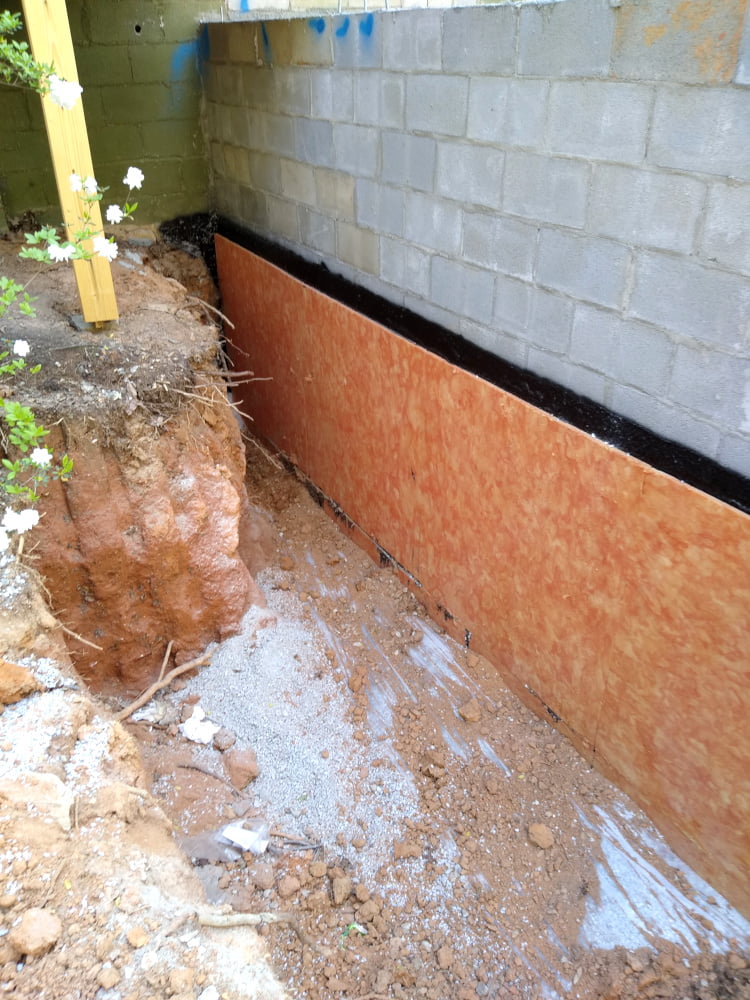 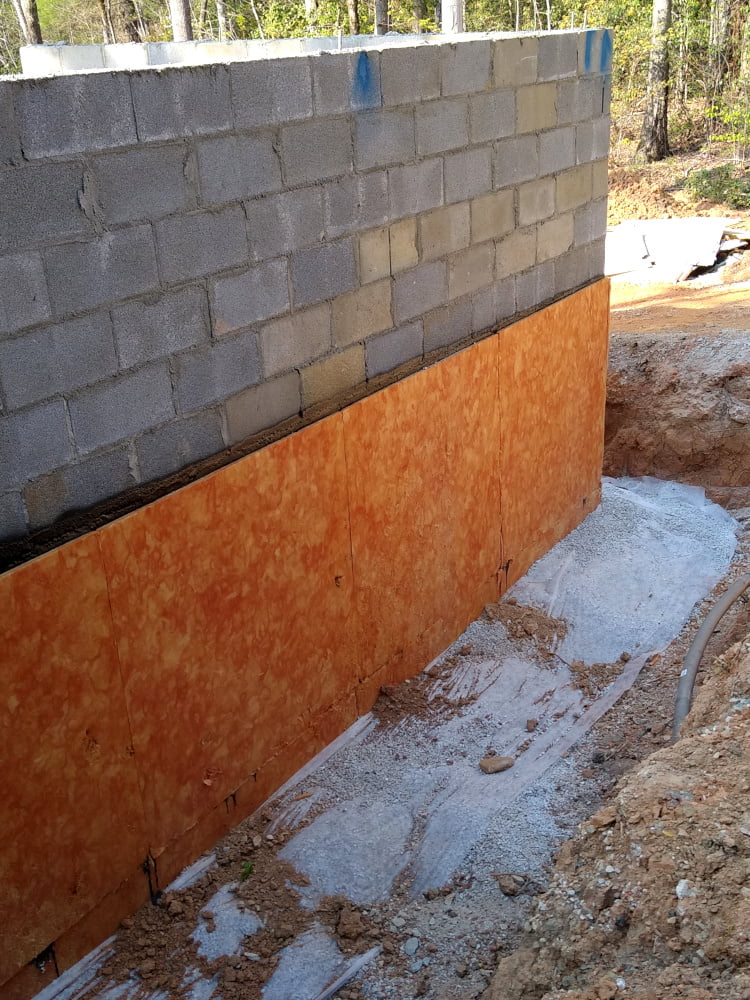 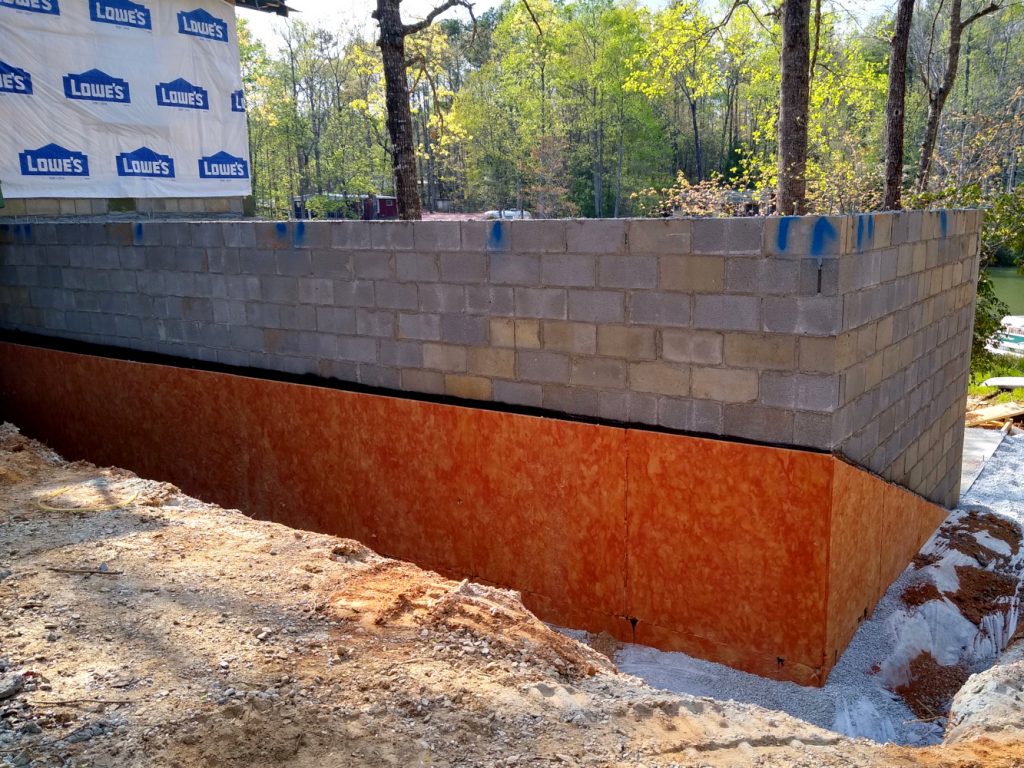 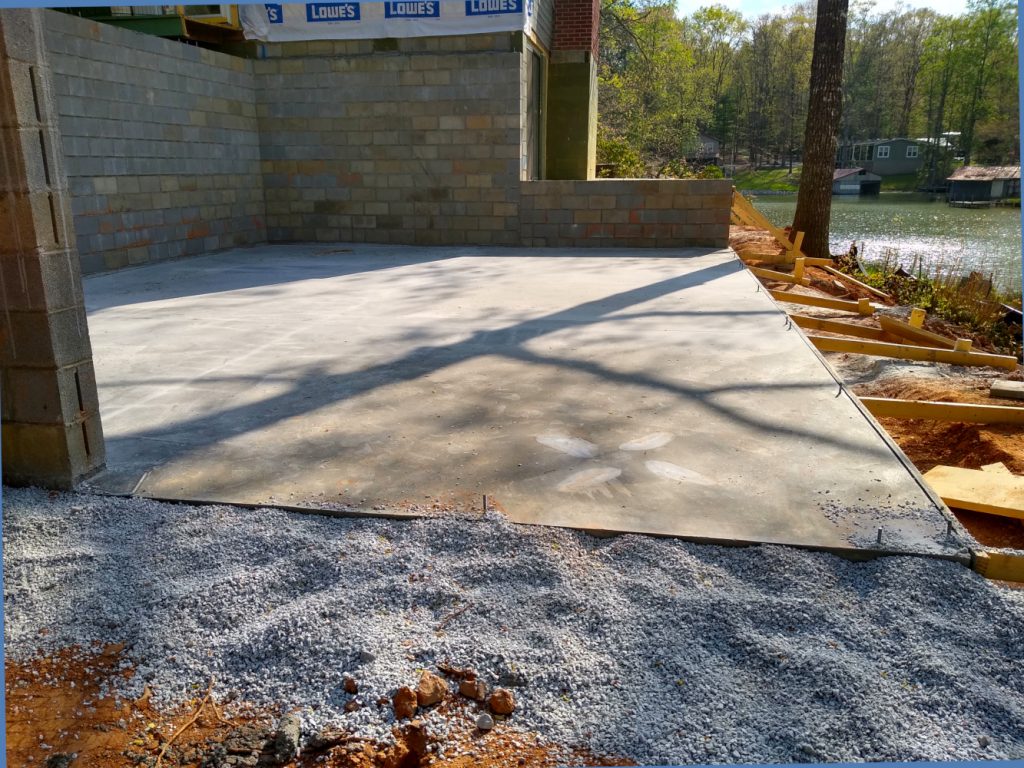 Once the waterproofing was complete, the finished foundation was ready for inspection. On Tuesday April 20th (the day these photos were taken), the county inspector came out and signed off on the foundation allowing the framing of the addition to commence.