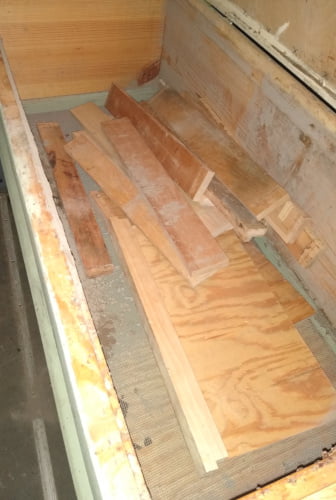 The heavy storms throughout the southeast USA early on the morning of Monday, April 13th 2020 spawned a number of tornadoes – some in the EF3 category with winds upward of 160 knots. Two of these passed within a few miles of both of our properties. Praise God, though, we suffered no personal injuries, nor any significant damage at either property.

We finally got up to inspect the Lake Becky property in upstate South Carolina Wednesday evening. We found no damage, but one of our beehives had been overturned. I righted it as soon as I saw it, but since it was dark and the bees were not too chuffed with recent events or with my flashlight on their home in the middle of the night, I left until morning to inspect the damage.

It was pretty bad. The frame of the hive lid had been broken, put praise God, the hive had not broken open, so the rain hadn’t gotten inside. Unfortunately, as you may recall, we recently switched from mineral oil to diatomaceous earth (DE) in the small hive beetle and wax moth larva trap trays beneath the hive bottom screen. Of course, DE will kill not only these pests, but also adult honeybees and their larvae. When the hive got knocked over, the DE spilled out of the trays, through the bottom screen, and into the hive chamber. But God be praised once more! Because of the angle at which the hive ended up resting, the DE spilled away from the hive entrance and brood frames.

This hive was the source hive for the walk-away split we did three weeks ago. As reported in hive-inspection-lake-becky-20200403 the last time we looked inside this box there was no uncapped brood indicating that either we made the split after the hive had already swarmed and raised a new virgin queen, or we killed the queen making the split.

Whichever is the case, at this point for at least two weeks, neither half of the colony has had a laying queen. That actually ended up being a blessing because when the DE spilled into the hive chamber there were no uncapped brood for the workers to kill by bringing the DE powder up to the brood cells. In fact, we saw very little DE on the frames. We did end up taking out the honey frame furthest from the entrance because it just had too much DE dust on it.

We transferred the remainder of the frames into the empty hive box we had set up in the hopes of catching a swarm to put into it. So far no swarms have shown any interest in the swarm traps we hung up around the property in Aiken County in the South Carolina mid-state. So that’s another blessing. The empty box was on hand for us to transplant the colony from the broken hive into. After a few minutes, most of the bees seemed to be settling down in their new home, and happy to have a stable and light-tight place to live again.

1 – We won’t be leaving the place unattended again without tying down all the hive boxes.

2 – We will be switching the pest larva traps back to vegetable oil. We had started out with vegetable oil, but found that it spoiled quickly in the South Carolina summer heat and humidity. So we switched to mineral oil. Then we saw on the Internet that someone was using DE in their traps. Since the DE wasn’t as messy as the oil, we switched to it. However we didn’t consider a few things.

a. If a hive gets turned over, certainly the vegetable oil would kill a few of the bees, but it wouldn’t poison the entire hive. With mineral oil or DE, the bees carry the poison all over the frames.

b. In high winds, the DE powder would inevitably get blown into the hive chamber. The mortality from it would probably be minimal, but the convenience of not having to deal with oil doesn’t justify any bee deaths at all from whatever we put into the pest larva trap trays.

Next week will mark the fourth week since the split. Hopefully sometime next week or the following week at the latest, we should start to see new brood in the split target colony. We did notice a recently emerged queen cell in that colony at the two-week point. Hopefully the occupant of that cell made it out into the world for mating and got back safely. If not, we’re going to need a new queen.

If God continues to bless us despite our foolishness we may even start seeing new larvae in the split source colony. If not (assuming the mortality from the DE isn’t overwhelming), it will be time to consider re-queening the source colony, or re-combining the two halves. Either way, it looks like another no-honey year for us. Unless they start building up pretty quickly, though, we may end up having to feed them through next winter.

Our next door neighbor’s webcam caught a fairly large black bear wandering around his yard the week before the storm. We weren’t here at the time. It is possible that the bear turned the hive over. The heavy rain would have washed away any tracks. I doubt this is the case, though. If the bear knocked over the hive, it’s not likely it wouldn’t have gone ahead and ripped it open for the honey too. Also, there was no sign of any disturbance of the ground around the hive. So we’re both agreed that it’s highly unlikely the bear had anything to do with the tragedy.