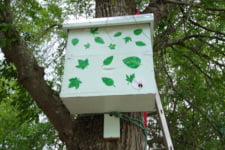 As noted in a recent post, I took the occupied swarm trap from Aiken up to Oconee county overnight last Thursday/Friday. A friend had warned me to take it out of the tree as soon as possible or it would be very heavy. Oh no – too late! These bees obviously moved into the trap way before last Tuesday when we first noticed them. As soon as it got good and dark Thursday evening, I closed up the trap entrance and lowered the trap out of its tree. Then I gathered up the doggies and off we went to our upstate lake property, arriving there about 1 AM.

As I previously noted, the swarm trap is constructed from two five-frame deep Langstroth boxes. I have read that this mimics the kind of bee tree hollow the swarm scouts are looking for when searching for a new hive location. Inside, I placed five deep frames that had previously held brood in the top half of the trap. These frames had no foundation or wiring – just the wooden frame. I brought along a double-deep nuc box with solid bottom and ordinary inner cover and telescoping cover into which I planned to transfer the captured swarm. When I arrived, I put the new hive and swarm trap into place, opened up the swarm trap entrance, quickly turned off my head lamp, walked away, and headed off to bed with the doggies.

The next morning was blustery and cool, but sunny. I waited as long as I could for the temperature to warm before making the transfer. When I opened up the trap, I was a little surprised by what I found. The bees had drawn quite a bit of new, white comb. Thankfully, they built one of their combs along the top of one of the empty frames I had placed in the trap. I was able to free that frame up without doing too much damage, and transferred it and its bees into the nuc. The other combs were straddling the remaining four frames at right angles to the frame spines. I did a lot of damage to that comb getting the remaining bees out of the trap and into the nuc. In the end, only the comb on the frame that had been drawn “properly” could be salvaged.

The most surprising thing, though, was that I saw no brood or pollen during this quick transfer. What I did see was two beautiful, capped queen cells. Praise God that they were on the “properly” drawn frame down near the bottom, so I didn’t damage them during the transfer. What I think happened is that this swarm left their old hive along with a laying queen, found our swarm trap and set up housekeeping in it. Once they had drawn out some comb, and the old queen began laying again, they selected some of these new eggs to raise up as new replacement queens, and once they were safely established in their queen cells, the vicious little brutes killed their old queen.

That’s all good news for us, though. We had been hoping to be able to raise up some new colonies of upstate survivor stock, and their new queens will be mating with local upstate “hillbilly” drones, so at least this colony will have half “hillbilly” DNA. We’ll see in another couple of weeks whether either of the new queens gets out, gets mated, and starts laying some new “local” bees up at Lake Becky.

So I buttoned the swarm trap back up as quickly as I could, and headed back down to the midlands – none too soon either, because I got a call as I was just about to head down that Sue was being released from the hospital that afternoon. When I got back to the Huppstead, I really felt guilty, because two of the workers had been caught in the swarm trap unnoticed. When I got back, and opened it up, out they buzzed wondering what happened to the rest of the tribe. Sadly, these poor orphans have little chance of finding a new home, and likely died of exposure the next night. It broke my heart.