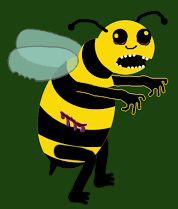 What bizarre ideas spring forth from my little bee brain!

Our hives are all still thriving, judging by the flurry of activity around them on the occasional warm, sunny mid-winter days here in South Carolina. Nevertheless for the past several nights running, my sleep has been broken by nightmares of an imminent zombee apocalypse. In my dreams, our bees have apparently picked up some sort of zombeeliciousness from the local hornets, and are passing them on to human beeings through stings. As the infection gets worse, the bees become more and more aggressive, and can be heard buzzing zzzfleshzzz as they seek out victims to sting. For some reason, in the dream, we are living on an island, so until last night, the infection had been contained there, but now it has spread to the mainland.

No. I haven’t been reading Randy Oliver’s page and eating pizza just before bed. And like I said before, our bees seem to be doing just fine. Perhaps these dreams were triggered when I saw a few dead small hive beetle larvae in one of our oil traps the other day, and thought to myself, “I really need to change the oil in those and re-level this bee yard while it’s still cold and the bees aren’t out and about.” Maybe it’s because I know that spring is rapidly approaching, and I’m utterly unprepared with swarm traps, and spare boxes with which to deal with the upcoming swarm season.