I’ve been going through my memorabilia file the last few evenings, and ran across this poignant cartoon I’ve been hauling around the world for the last 30 years. 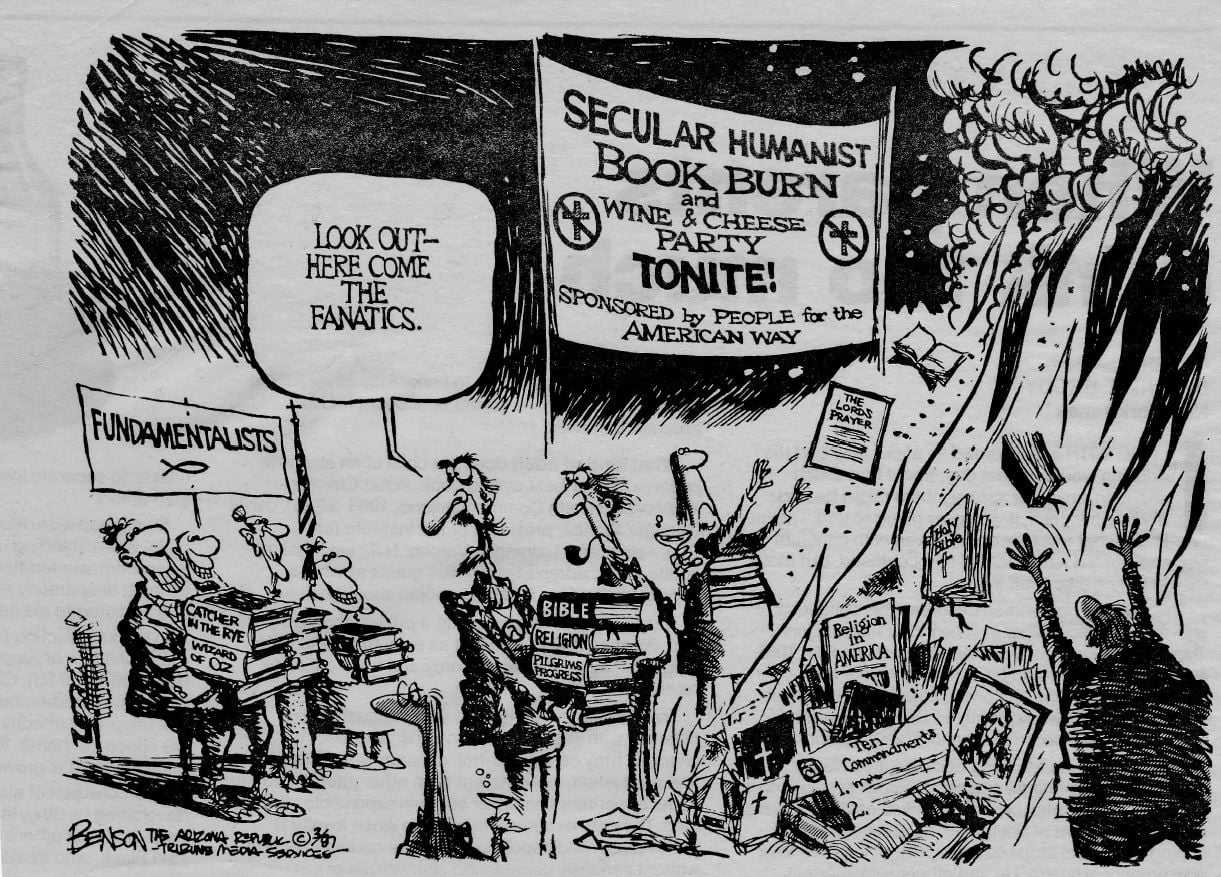 It reminds me of an eerie experience I had in Berlin. I never got the chance to visit Berlin when it was a divided city. Only two years after this cartoon was published, the ghastly Berlin wall which had stood for nearly three decades as a symbol of totalitarian oppression was torn down. In that Autumn of 1989 there was great optimism that mankind had finally moved beyond the era of nationalistic dictatorships that had scarred the twentieth century, into a new age of freedom of expression.

Many years later I finally got the opportunity to visit Berlin, after the wall had long since been torn down – scattered remnants of it having been preserved as memorials of the dismal days when the bleak wall had severed the city. A short walk east from the Brandenburg gate brought us to Bebelplatz – the city square where in 1933 Nazi student groups made a huge bonfire of some 20,000 books disapproved by the Nazi party which had recently taken control of the German national government. Most of these books were from Jewish authors of course. In the square today, some of the paving stones have been replaced with glass panels through which one can look down on empty bookshelves – enough of them to hold the 20,000 books which were lost. Beside one of the glass panels is a bronze plaque on which is engraved a quotation from an 1821 play written by the German poet Heinrich Heine. It took me a little time bending over the plaque with my poor knowledge of German to realize what Heine had said, but when I finally got it I literally fell to my knees as a profound sob welled up in my throat.

That was only a foreshadowing. Wherever people burn books, people will in the end also burn people.

That same sob rises up from my heart again every time I think of Bebelplatz, or look at this cartoon. But these days in addition to my grief for the millions of people those fanatics burned in the concentration camps, I’m filled with horror as I see that same kind of fanaticism on the streets of my own beloved country – the United States of America – a nation which has stood over two centuries on the ideological foundation of freedom of expression. Like the Nazis, Americans today of every political and religious persuasion seem to believe that the spoken or written expression of any idea with which they disagree must be suppressed. Anyone stating ideas and opinions not approved by the group currently in power in any given year is deemed to be uttering so-called “hate speech,” made illegal under a growing number of state and federal statutes being enacted at a frightening pace. Like the puppet courts in Nazi Germany, America’s judges are no longer willing to take a stand against the suppression of people’s Constitutional right to freedom of expression. American citizens as a whole have become almost totally intolerant of any expression of ideas or opinions with which they personally disagree.

Of course, we don’t burn books anymore, because most Americans today simply don’t read books. The counterpart to book burning in America today is the public demonstration and counter-demonstration which replaces considered discourse and debate with a shouting match, and brawl. So-called “town hall” meetings convened to discuss political issues almost always degrade into similar brawls in which the featured speakers are simply booed off the stage by the citizens in attendance who disagree with their views. On our university campuses which should be rich wellsprings of the widest variety of new ideas, we have seen outright riots whose aim was to prevent a guest speaker from even stating his ideas.

With all this abject intolerance of any form of dissent we see day-to-day on our streets, on our university campuses, in our public meetings, and even within our legislative assemblies and courts of law, I must ask myself, can it be very long before people start burning the people with whom they disagree?