With apologies to Jerry Jeff Walker…

M – is for the mudflaps I put on my pickup truck. 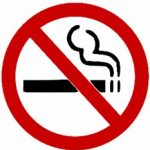 This morning I headed out for yet another load of building supplies. On the way, I stopped in at a gas station to fill up what I laughingly call my farm truck, some gas cans for the generator and mowers, and a can of diesel for the tractor.

As I was running my card, a guy came out of the store smoking a cigarette, and started pumping gas into his truck on the other side of the island. I thought about if for a few seconds, then went around the island and said, “It IS a gas pump,” pointing at the cigarette he was holding between the fingers of the same hand he was using to squeeze the pump handle. He said, “Oh yeah,” set the pump nozzle lock, and walked up two feet to the open door of his truck where he leaned against the driver’s seat and continued to smoke his cigarette.

I decided it was a lost cause, and went back to pumping my own fuel on the other side of the island. I must say I was quite relieved when he managed to finish pumping his gas without blowing us all to Kingdom Come and drove off. My enthusiasm was quashed quickly, though, when he was replaced by a guy driving a large 4WD diesel pickup who left his engine running while he was pumping his fuel, because…. uh… because… uh… well, just because. At least it was a diesel.

Before I left, I double-checked the name of the gas station. For a minute there, I thought it might be the Dew Drop In.

The Surly Curmudgeon uses cookies to improve your experience while visiting the website. Cookies categorized as necessary are essential for basic functionality of the website. Non-necessary cookies allow The Surly Curmudgeon to analyze and understand how visitors interact with the website, facilitate delivery of embedded content (e.g. video) from external services, enable customized ad delivery, and a variety of other functions that aren't strictly necessary for the website to function. Non-necessary cookies will be stored on visitors' devices only after obtaining visitor consent. Visitors also have the option to opt-out of necessary cookies. However, doing so may prevent a visitor from being able to access some basic website functions and may possibly even prevent a visitor from browsing any of the website content at all. It is not recommended that you disable necessary cookies.
Necessary Always Enabled