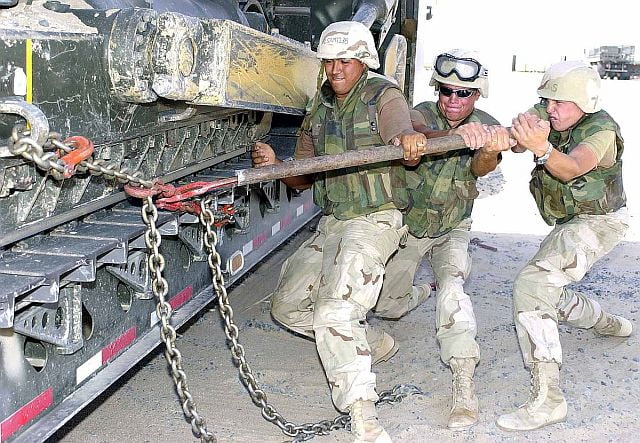 A dear friend recently reminded me of how sections of pipe are sometimes put onto the handles of tools like pipe wrenches to increase leverage – often with “suboptimal” results. It reminded me of this story.

Years ago when I was supporting an Army unit which shall remain nameless, I was called out one late afternoon to fix a local area network problem. I knew I was in trouble when I noticed that the soldiers were “bunny hopping” from the ground to the first step of the ladder leading up into their communications van, before grabbing the handrail for the rest of the climb. When I tried to climb up into the van grabbing the handrail first, I got a nasty little electric shock, so I quickly adopted the soldiers’ strategy of hopping onto that first step before grabbing the handrail.

The cause of the network problem was obvious. The Ethernet transceiver was dead. These failed pretty frequently, and the unit had several spares, but upon installation the replacement immediately failed too. Before blowing up another spare, I decided to disconnect the Ethernet coaxial cable from the outside of the van. By this time it was getting dark, and as I removed the cable, I noticed an electrical arc between the jack on the van and the cable’s outer shield conductor. I got out my multimeter and measured the voltage between the disconnected cable’s shield and the shield of the Ethernet connector on the communications van. There was only the very slightest intermittent DC voltage reading, but on a well grounded system, that voltage should have read a solid zero. Switching to AC on the multimeter, I found just under 100 volts AC riding on that shield. Here was the source of the shocks we were getting from the handrail. With the Ethernet cable disconnected I could safely grab the comm van’s handrail with nary a tickle. That AC voltage had to be coming from wherever the Ethernet cable was connected at the other end.

After tracing the cable across the site in the twilight, I found it running into one of the unit’s maintenance vans through the van’s drain hole. The soldiers had set that van up as an Internet cafe of sorts, with several desktop computers connected in a daisy chain to my troublesome Ethernet coax cable. When I tried to climb the ladder into that van, I again received that nasty little shock from the handrail. The van was definitely improperly grounded. But I checked the ground connections, and all appeared tight and undamaged. Assuming there might be a short circuit in the power system of the maintenance van, I asked for it to be powered down so I could check the power panel and input power cable.

But how could the soldiers have possibly put that power cable on wrong? It was keyed with a heavy-duty metal key ridge on the cable connector that slips through a metal channel on the van’s power connection jack. If the cable isn’t oriented correctly, the metal key is blocked by the metal shell of the equipment’s power input jack which should prevent the cable from being connected to the equipment improperly. I disconnected the cable, and found that the metal keying ridge on the cable had been completely ground off by the metal shell of the power connector on the van. When I asked the soldiers how that might have happened, they told me that the cable had been a little hard to screw on, so assuming it was just dirty, instead of removing and cleaning it they had taken a large pipe wrench and put a length of steel cheater pipe over the wrench’s handle. They then applied this torque-enhanced tool to the cable’s locking ring, forcing the power cable to submit to their combined wills to defeat the safety system.

The problem with building an idiot-proof system is that someone simply builds a better idiot.