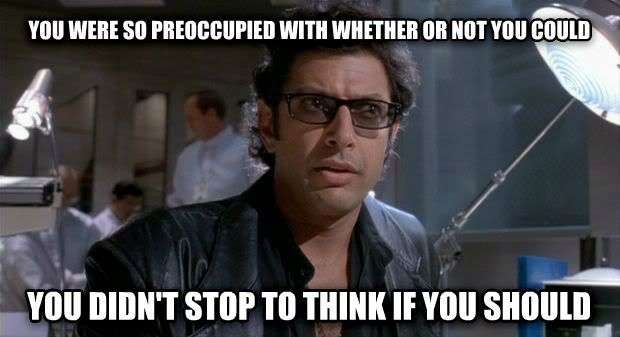 CAVEAT – I don’t have the answers to the questions posed below. If the truth be told, I don’t even have all the questions. But these questions and many others like them are worth considering before our technology “advances” to the point that such consideration is forced upon us as an “emergency.”

The Ethical Problem with Clones and Artificial Intelligence

Our science/technology may soon be able to create human clones and machines which are (nearly) human in their “thinking.” As with so much of our “progress” over the last several centuries, our capabilities in these two areas have far outpaced our morality and ethics regarding our “creations.”

On Monday evenings, we are hosting a Bible study/discussion group with our neighbors – Becky Bereans – named for the little private lake on which we live – Lake Becky. Over the last couple of weeks, the group has taken up the subject of Death and Resurrection. As a framework for these discussions, we are using a paper written by Dr. Lehman Strauss called Death and Afterward. In that paper, Dr. Strauss contends that in order for us to truly understand what God’s Word has to say about resurrection, we must first grasp the concept of man as a trinity of body, soul, and spirit.

The Becky Bereans took up this topic last Monday evening, with much of the discussion focusing on the concept of the human soul. Our souls form the core of our being – the seat of our thoughts and emotions, and the foundation of our sense of self. Biblically, the first man didn’t become a “living soul” until God Himself breathed the breath of life into the nostrils of Adam’s body, which He had formed from the dust of the Earth. Considering the soul thoroughly, raises a number of challenging questions…

Our Becky Bereans discussion the previous week focused on death – specifically bodily death. Two of the questions raised in that discussion have relevance to the consideration of the nature of our souls for the purposes of this BriRant…

These questions have been weighing heavily on my mind (soul) over the last few weeks, culminating in a challenging dream I had this morning. The dream was unusual in that I awoke several times during the night, and afterward when I returned to sleep the dream continued as if uninterrupted. In my dream, although I didn’t know it at first, I was the “owner” of a “spare parts” clone – a much younger version of myself purchased as “insurance” against the potential failure of my critical body parts. While going about my mundane daily activities, I suddenly realized that I had lost my credit cards and ID credentials. At first I thought I had left them at a friend’s house, and decided to go on my bicycle to retrieve them – an oddity since I don’t even own a bicycle, but I digress. But then for some reason, I wasn’t able to locate the bicycle either. I decided I would simply have to go about the tedious process of replacing all of these credentials individually with the issuing agencies. But each of those issuing agencies required some kind of “root” credential as a starting point for the replacement process. In every case, I found I couldn’t access the required root credential. In essence, my entire identity had been erased. My clone, on the other hand, had an inherent identity credential embedded in himself at the time he was created. But I couldn’t use my clone’s identity as my root identity credential either. That identity belonged to my clone, not to me. Then at the end of the dream, I finally realized that I was actually my clone. My original identity was completely gone, and even the location of my original physical body was a mystery, if indeed my original body still existed at all. Had I (my clone) stolen my (original) identity, or did my identity already belong to my clone when he was created? In the end of my dream, I found myself (my identity) completely inextricable from my clone’s.

But What Does It All Mean?

In his song – Gates of Eden – Bob Dylan wrote this…

At dawn my lover comes to me

And tells me of her dreams

With no attempts to shovel the glimpse

Into the ditch of what each one means

With most of my dreams, I myself don’t even have an inkling of what they might mean. But with this one, I think the meaning is clear along with my personal beliefs regarding some of the ethical and moral questions regarding clones.

We hold these truths to be self-evident, that all men are created equal, that they are endowed by their Creator with certain unalienable Rights, that among these are Life, Liberty and the pursuit of Happiness.

Preamble to the United States Declaration of Independence – https://www.freedomworks.org/we-hold-these-truths-to-be-self-evident/

Many – if not all – of these conclusions would apply equally to artificial intelligence entities (e.g. androids) if mankind’s technical capabilities ever “progress” to the point that we can create machine intelligence equivalent to human intelligence. The television show “Star Trek – The Next Generation” tackles many of the ethical questions pertaining to such “machines” through the character Data. One of my favorite episodes of that show along these lines is called “The Offspring,” in which Data creates a “daughter.” Another episode – “The Measure of a Man” – considers Data’s rights to determine his own destiny versus those of Data’s “owners” – Star Fleet. In the realm of science fiction the idea of sentience among machines and the moral and ethical questions that arise from it is a continuing theme – e.g., Isaac Asimov‘s I Robot, Robert Heinlein‘s The Moon is a Harsh Mistress, Arthur C. Clarke‘s 2001 – A Space Odyssey, and Philip K. Dick‘s Do Androids Dream of Electric Sheep?.

For the time being, the concept that machine intelligence might progress to the point where machines become self-aware (and might thus be said to possess souls) remains a possibility for the distant future. Nevertheless, I would put to you that the time to consider the consequential moral and ethical questions that will inevitably arise from it is now, rather than putting them off until circumstances force a crisis of conscience upon us. The technology to create human clones already exists. The technology to create human-equivalent artificial intelligence may not be as far in the future as we might believe. The time to consider the moral and ethical implications of these technologies is now!

2 thoughts on “Do Human Clones Have Human Souls?”