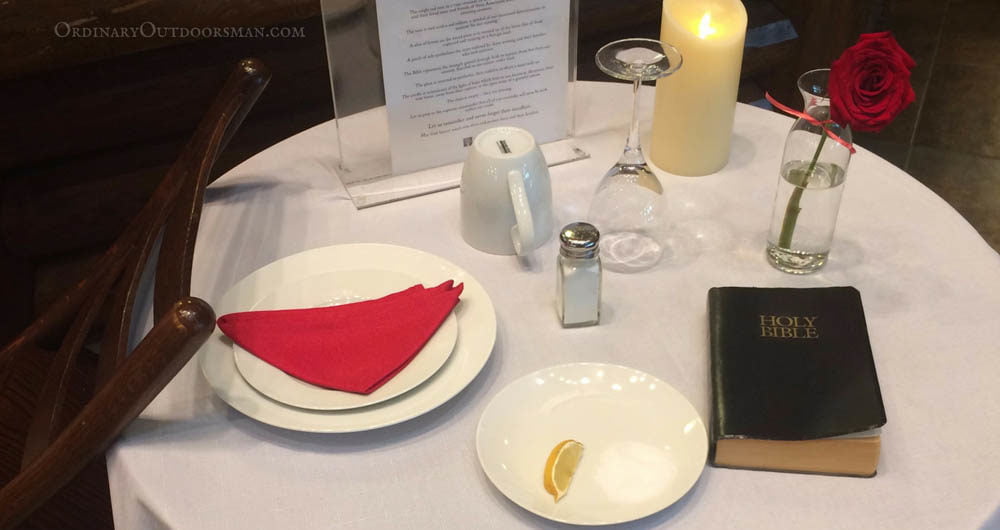 First off let me make perfectly clear that Memorial Day isn’t for me or any other military veteran now “quartered safe out here.” It’s not even to honor those who are currently serving in our military at various “vacation spots” around the world. That’s Veterans Day. Memorial Day is set aside for us to especially honor those veterans who gave their lives for America or are missing in action. It’s a day on which we ponder the liberty we enjoy in our blessed country, and how much it has cost those heroes and their families to obtain those freedoms and to preserve them over the last nearly two hundred fifty years. Thus it is fitting that Memorial Day is marked in military dining facilities and elsewhere throughout our country by a symbolic “missing man” table such as the one shown here.

Nevertheless, most Americans – myself included – think of Memorial Day as a holiday set aside for us at the beginning of the summer. Unlike Veterans Day – celebrated on the eleventh day of the eleventh month in remembrance of the armistice which ended WWI, Memorial Day always falls on the last Monday in May. For many of us, this holiday is the first one in the year recognized by our employers as a paid day off. Since it always falls on a Monday, that means that folks who work a Monday-Friday type of job get a three-day weekend away from work. As a military man, and later as a military contractor, I have spent a large proportion of the Memorial Days throughout my career deployed to various locations. Indeed, oddly enough, I had never eaten in a military dining facility on Memorial Day, and I had never seen or even heard of a missing man table until Memorial Day 2005 when I walked into the chow hall on one of our bases in Iraq. When I realized the significance of the missing man table as I walked by it, a sob rose into my throat, and tears welled up my eyes. But the day itself was for me just like all the other days there in a continual stream of 7-day work weeks. I don’t know the exact count, but I believe my hit rate for having Memorial Day off during my career has been just about 50%.

One very memorable Memorial Day during my military career was the first one I spent in Germany. Our unit always went out on a field exercise in May, and that year the exercise took place in the weeks preceding Memorial Day. We got back to garrison from the field on the Friday before Memorial day, and began setting up our equipment. It was my team’s job to make sure the equipment was operational by the following Tuesday morning so the unit could take up its garrison mission. There was always some part of the equipment that was not working after coming back from the field, and this particular weekend, it took us from Friday evening until early Sunday morning to get everything working. But when we called for the on-call testing team from operations to come and check out the equipment so we could go home and have Memorial Day off, we couldn’t get any of them to answer their phones. So while the rest of the team slept on the floor of our workshop, I sent out one of my Sergeants on his motorcycle to go pound on the door of the unit commander’s home at 5:30 AM on Sunday morning to report that the equipment was ready for operational checkout. We finally got to go home just before noon on Sunday, but at least my folks had that Memorial Day off.

Even though I know Memorial Day isn’t supposed to be about the barbecues, and the long weekend off duty, I still feel abused and get sullen when I have to work on Memorial Day. Indeed, one might fairly say I have developed a deep-seated Memorial Day neurosis over the course of my working life. Such contention is borne out by my dream last night. This Memorial Day weekend, I have been blessed to spend with my wife and dogs at our lakeside property in the Appalachian foothills. After a slight delay, we managed to make it up yesterday afternoon, and after unburdening our van and trailer of the latest load of precious stuff from our Aiken home, we spent a leisurely evening (despite the mountain of work that still needs to be done before we can truly occupy this property) and settled into bed early for a change.

Although Memorial Day isn’t until tomorrow, my dream revolved around it. In my dream, I once again had to work on Memorial Day weekend. I was at my current job location along with my current workmates. For some reason unclear in my dream, rather than driving in myself I had asked my wife to drop me off at work. She had gone off somewhere in the van with the intention of picking me up to continue our journey up to the lake property once the work I had to do was finished. Exactly what that work was remained unclear in my dream, but very quickly it became apparent that I needed to record the time. Not only did I need to record time with the company where I work, and with the labor contracting company that sends me my paycheck, but also for reasons not completely apparent in my dream, I needed to record my time with the company I retired from several years ago – with which I spent many of those working Memorial Days previously mentioned.

Unfortunately, I had left the RSA token I needed to log onto that company’s VPN at home, and since Sue had the van with her, I was unable to retrieve it. Thankfully, one of my workmates offered to take me somewhere that I could rent a car to drive back home and fetch the RSA token. But then I realized it had been so long since I retired from my former company that I couldn’t remember the URL for their time recording website. Somehow I managed to locate someone at my current company who had also worked at my old company, and remembered the URL. But she was tied up in a private meeting in her office. Nevertheless, I impatiently burst into her office and asked her to give me the URL. It was a very long string of seemingly random characters – certainly not something I could memorize. So I asked her to send a screenshot of it from her phone to my workstation.

So finally everything was in place for me to record my time and get out of there for the rest of the weekend. But when I looked out the window as I was going back to my cube, I saw that the Rhein river which was inexplicably running at full flood behind our building in Columbia, SC was blocking all the exits from the area, carrying along with the flood all of the motor traffic from I-20 (which in reality runs next to our building). So until the river went down, I was unable to drive the rental car back home to fetch the RSA token. While we waited for the river flood to subside, I asked my workmate why we were working on Saturday anyway. He replied that because we would be taking Memorial Day Monday off, we had to work Saturday to make up for it.