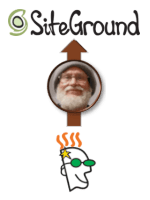 I finally got fed up enough with GoDaddy’s speed issues, downtime, and tech support responsiveness that I decided to move The Surly Curmudgeon elsewhere. After a dismal failure trying to use BlueHost’s migration plugin, I decided to go to SiteGround. So far, SiteGround’s performance and tech support responsiveness has been everything I’d hoped for, but the “one-click fast and free” migration process caused (and is still causing) pain.

To wit, visitors will find a lot of question marks – literally. SiteGround only allows database tables to have UTF8 character encoding, while GoDaddy was using something else. After a couple of false starts, and a really scary couple of hours in which both sites were inaccessible on the back end. I decided to stick with the new site despite the character encoding issues, and (over the objections of SiteGround tech support) to just edit all the pages and posts to fix the special character encoding. I have finished cleaning up all the pages and BriBlog posts, but it’s going to take a while to work through all the Bible studies (particularly since there are so many Hebrew and Greek snipets in them). I’ll work slowly through them, so please be patient.

I will also write up a summary of the site migration gotchas “real soon now.” Standby… for NEWS.